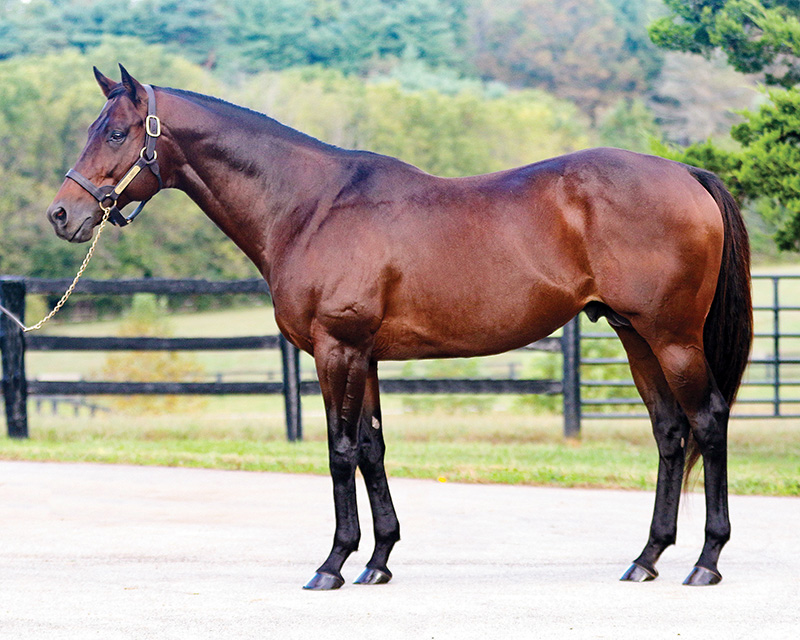 Paul Reddam and Ciaran Dunne’s Red Wings pinhooking partnership purchased the filly for $50,000 at the 2019 Fasig-Tipton July sale. The juvenile filly worked a quarter mile in :20.3

The Fasig-Tipton July sale was represented by two Firing Line Yearlings.  The first Firing Line was HIP 122, a Firing Line colt out of the mare Alexandria J.  The colt was sold to Redwings  for $110,000.  The second Firing Line to go through the ring was a filly out of Ever Nice (ARG) bred by eclipse award winning breeder Clearsky Farm.  She also sold to Redwings for $50,000.

Firing Line, a precocious G1-Juvenile who finished a close second to American Pharoah in the 2015 G1-Kentucky Derby, has sired his first two foals.

The first was a colt foaled in Kentucky at Crestwood Farm. He is out of the Petionville mare, Honorville, who was a multiple winning mare that earned $108,040 on the race track. “He’s a nice size, very correct. He is going to be a classy colt!” said Marc McLean.

Firing Line was a top class Graded stakes winner and multiple G1-placed earner of $976,000. A precocious two year old, he won a maiden special weight at Del Mar by 4-1/2 lengths, and then ran second by a head to Dortmund in the $500,000 G1-Los Alamitos Futurity. He rolled that form into his three year old year where he was a top Classic contender in 2015. He ran second in the $2,000,000 G1-Kentucky Derby, beaten just a length by Triple Crown winner, American Pharoah. He set a new track record in the $800,000 G3-Sunland Derby, winning by 14-1/4 lengths. During his career he defeated G1-winners: Frosted, Dortmund, Carpe Diem, Keen Ice, etc.

Firing Line comes from an active female family, full of Graded winners including; recent G1-Cigar Mile winner Sharp Azteca, along with many other champions, G1-winners, etc.

Firing Line retired to Crestwood in 2017 and bred a quality first book of mares. He ranked #1 by CPI and #2 by CI for all first year KY Stallions standing under $10,000 LF with more than 50 bred. 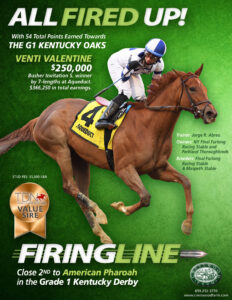 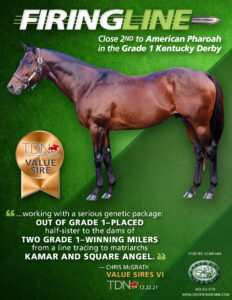