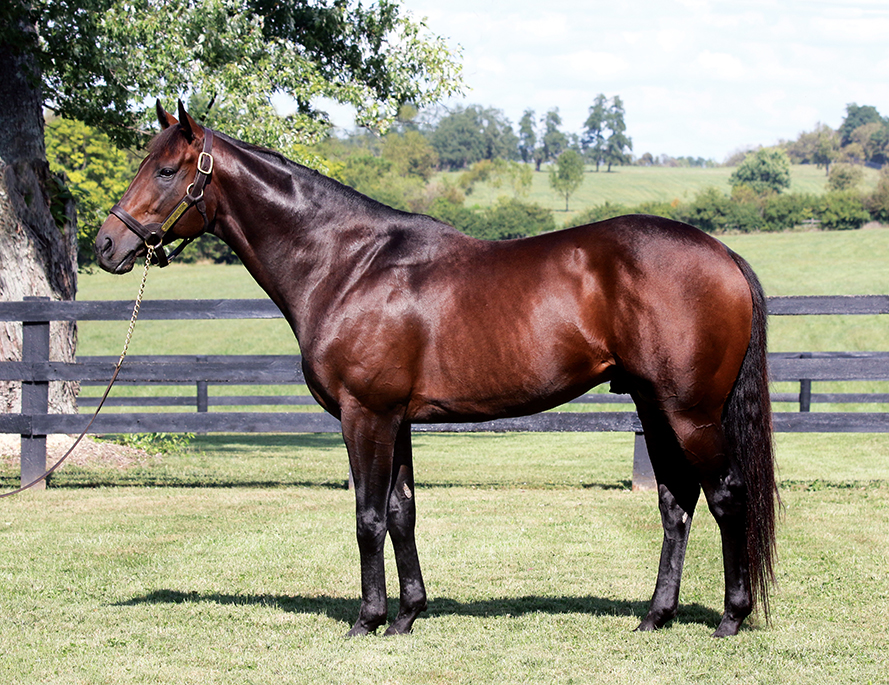 “We have been trying to get a son of War Front for some time, so we are very happy to get this horse at Crestwood.Jack Milton is the only Grade I winning son of War Front to retire to stud in 2016. He has the co-fastest Ragozin number, a 2, for any son of War Front standing at stud. He really fits our program; he was early enough to win first out at three, he is a Grade I winning miler with speed, by a top sire in War Front and he is from a huge female family. In addition, he is a nice individual that retired sound after a long campaign. There is a lot to like about him, and we are confident that he will be very well received by breeders.”

Tobys Heart is an exciting 2YO filly for Sophomore sire Jack Milton. On debut Tobys Heart was named a TDN Rising Star after a dominating 6 3/4 length MSW win at Churchill Downs. Tobys Heart was an odds on favorite in the Bolton Landing Stake and proved best while pulling away from the field at the wire.

Read more about the Bolting Landing S. and watch the replay here: https://www.bloodhorse.com/horse-racing/articles/242936/tobys-heart-much-the-best-in-bolton-landing

No Bull Jack, F, 3YO, Jack Milton–Lost Crown, by Hit the Trail. No Bull Jack was out of the gate slowly from the rail, rushed up inside to contend, then dueled with rival.  Around the turn, No Bull Jack lengthened her stride and pulled away from the field impressively to win by 10 ½ lengths.

WARLOCK DOC C, 2, Jack Milton–Destiny’s Reward, by Horse Chestnut (SAF). Warlock Doc won his debut via disqualification.  Warlock Doc broke from post 10 advanced on the outside down the backstretch to stalk the pace.  Warlock Doc continued to improve his position as the pacesetter, Spotted Bull, drifted and bumped him late. Spotted Bull held on by a head, but had his number taken down for the infraction.

Tobys Heart wins at first asking for owners Terry Hamilton & Brian A Lynch, and trainer Brian A Lynch. Read about the performance and watch the video by clicking on the link below to the Thoroughbred Daily News.

During the Fasig-Tipton May Sale, a two year old colt by Jack Milton out of the multiple stakes placed mare, Ultimate Class, brought $115,000.  Steve Young was the agent who purchased the two year old colt after breezing a snappy 1/8 Mile in :10.1

Jack Milton raced in the silks of Gary Barber and was campaigned by Todd Pletcher. He retired sound as a Graded stakes winner at three, four, and five after 19 career starts at eleven different tracks and with earnings of $853,828.  Jack Milton notched his Grade 1 win in the Keeneland Maker’s 46 Mile, captured two other Graded victories and also placed in an additional six graded Stakes, three of them Grade 1 races.